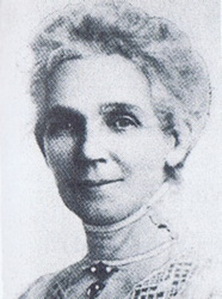 Wyeth Chapter was the fourth chapter organized in the state of Idaho. Mrs. D. W. (Emma) Standrod was the organizing regent of Wyeth Chapter that was organized July 10, 1915 (National Charter Number 1250). There were twenty-three charter members. Mrs. Standrod served as chapter regent from 1915-1917 and as state vice regent from 1922-1924. In addition to several other chapter and state chairmanships, she was regional vice chairman of Historical and Literary Reciprocity for the nine northwestern states for eleven years. She organized the State War Mothers in 1917, and the Red Cross for Bannock County. She was very active in war work. During her regency $200 was invested in liberty bonds and a Colonial Ball was held each year, the proceeds of which were used for Red Cross work.

Mrs. Standrod was born in Glenville, Schenectady County, New York, a daughter of John C. and Nancy (Van Patten) Van Wormer. She married Judge D.W. Standrod in 1888. They had two children: Drew Standrod and Elvira Campbell Standrod. She was a member of the Congregational Church. She was educated in the public schools of New York State and Cornell University (Class of 1870). She came west under the “New West Education Commission” and was principal of schools in Malad and Bellevue, Idaho.

The content contained herein does not necessarily represent the position of the NSDAR. Hyperlinks to other sites are not the responsibility of the NSDAR, the state organization, or individual DAR chapters. Contact Wyeth Chapter at this email.